How Often Do I Need To Pump My Septic Tank

The septic system for your home or business is designed to operate efficiently on its own for many years. There are a few factors that will determine its effectiveness of operation.

What To NOT Do When You Have A Septic Tank
• Do not put any unnecessary “Septic Tank” chemicals down the septic – a septic system is designed to do the work itself.
• Do not pour any household chemicals down the drain or toilet – especially bleach, paint, solvents, paint thinner, nail polish remover etc. All of these will disrupt the natural chemical balance in the septic system.
• Do not pour oils, grease or fat down the sink or toilet.
• Do not put any Feminine products into your septic system.
• Do not use excessive amounts of water in one or two days – spread the use over the week.
• Do not leave leaky water taps or toilets – this can accumulate to gallons of water entering your system unnecessarily.
• Do not drive any vehicles or large equipment over your septic tank or pipes – this will cause major damage.
• Do not plant any trees or flower gardens in, on or too close to the weeping bed.
• Do not build over your septic tank or weeping bed – if there is ever a problem OR when your tank needs to be pumped this will cost extra and may need to be removed or damaged to do the repair/pump.

All of the above issues can lessen the effectiveness of your septic system and cause pre-mature blockages or backups.

Depending on how many people live in your home you should check your septic tank yearly to ensure there are no visible blockages going out to the weeping bed and to ensure the “sludge” level is manageable. As the sludge level “solids” increases in the tank, the effectiveness of the tank to breakdown lessens due to the smaller capacity. The septic system is designed to work as a system with the tank and bed by breaking down the biologicals before the liquid wastewater goes out to the weeping bed for proper drainage and treatment. .

The average time between pumps for a typical household of 4 people would be approximately 3-4 years. This is in ideal conditions where none of the above “What NOT to do’s” are being done.If you have more than 4 people in your home you will need to consider pumping more often, as well the opposite if you have less people you could get by a couple/few more years before needing to pump.

If a tank is left too long between pumps the sludge or solids, can begin to clog the outlet to the weeping bed or worse clog parts of the weeping bed. When this happens the water and solids have nowhere to go and this is typically when sewage back up’s occur in the home.
When in doubt always call a professional – ensure that when you do call and book a cleaning they are removing all liquid and solids from your tank!

If you have a Septic System, how do you care for it?

A Septic System is in fact very simple – yet it requires regular maintenance to ensure it can still perform every vital task it is designed to do. The septic system is a network of pipes which begin in your home, drain into one pipe which is underground and is connected to the septic tank where the liquids and solids flow. The sludge sinks to the bottom and the liquid flows out to the weeping bed. As solids break down they will then flow out to the distribution box and leach out into the bed as well. 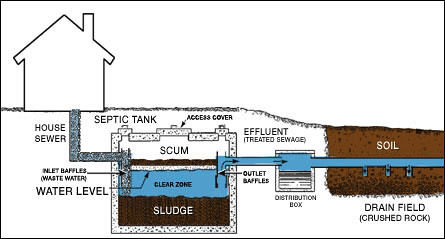 The sludge is what can cause your system problems. As the sludge accumulates, this will decrease the volume of your tank which then also decreases the retention of liquid before it leaves to the bed. If sludge is left too long this can cause your bed to plug up as there will be less space for the solids to break down and could flow out with the water into the bed. Worse is when the sludge reaches the outlet level and begins to plug up the distribution box, or worse the pipes in the weeping bed. If the system is left too long, unfortunately the weeping bed and tank will need to be replaced. 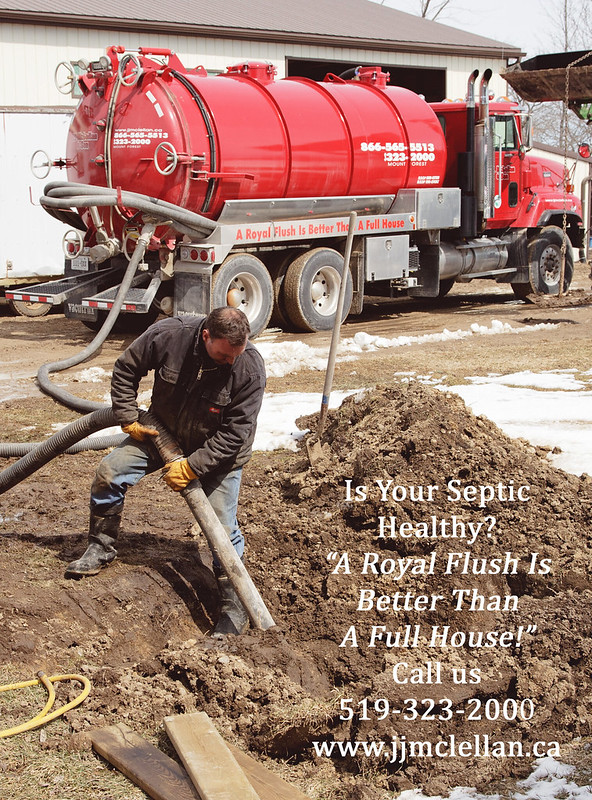 How do you know if your septic is healthy?

An awful way to be reminded of the safety required with septic tanks. Even with the lids, they must be covered at all times to ensure the safety of any children, adults and animals.

We do required the lids to be accessible for pumping out your septic tank, however please do take all precautions when preparing your tank for the cleaning. Children are curious and very innocent. This is such a tradegy for this 2 year old.

Inspect your lids and ensure they are solid with no cracks or broken pieces. If you require new lids or would like an inspection please give us a call at 1-866-565-5513.

Before becoming involved in the family business I really had no clue what a grease interceptor was or what on earth you would use it for – other than to “intercept” something … however now many years later I realize how important these are for many businesses.

Also… for any home owner how important it is to NOT put any type of oil/grease down your household drains. Have you ever left a pan sitting out on your counter after you’ve made bacon, and the grease in the pan begins to harden and forms a very thick film. Just think, if you had put that down your drain, even if you run the water for a few mintues, the grease will not cleanly rinse down your pipes without building up a residue as its making its way down the pipe – thus beginning to restrict the flow in your pipes. Do this multiple times a month after cooking anything with oil, for many years and you will have problems – which could result into major issues!

What could happen? Your pipes clog… where will you be affected? This could happen when you least expect it, you put your dishwasher on before bedtime, wake up in the morning to water all over your kitchen which is now flooding to your basement. Dishwasher’s do use hot water, however if over time this residue continues to build up and any food gets down the drain, this could clog and something that is preventable could cause thousands in damage. Where the damage can be major is where your household water waste and sewer water goes into your septic or sewers. If things get blocked here, you could have a backup in your basement… I dont need to go into any further detail because we can all imagine how awful that wouild be !

Read the article below… if you have any questions feel free to give Jamie a call at the office and if you are ready to have your grease interceptor pumped out or your septic pumped give us a call 1-866-565-5513! 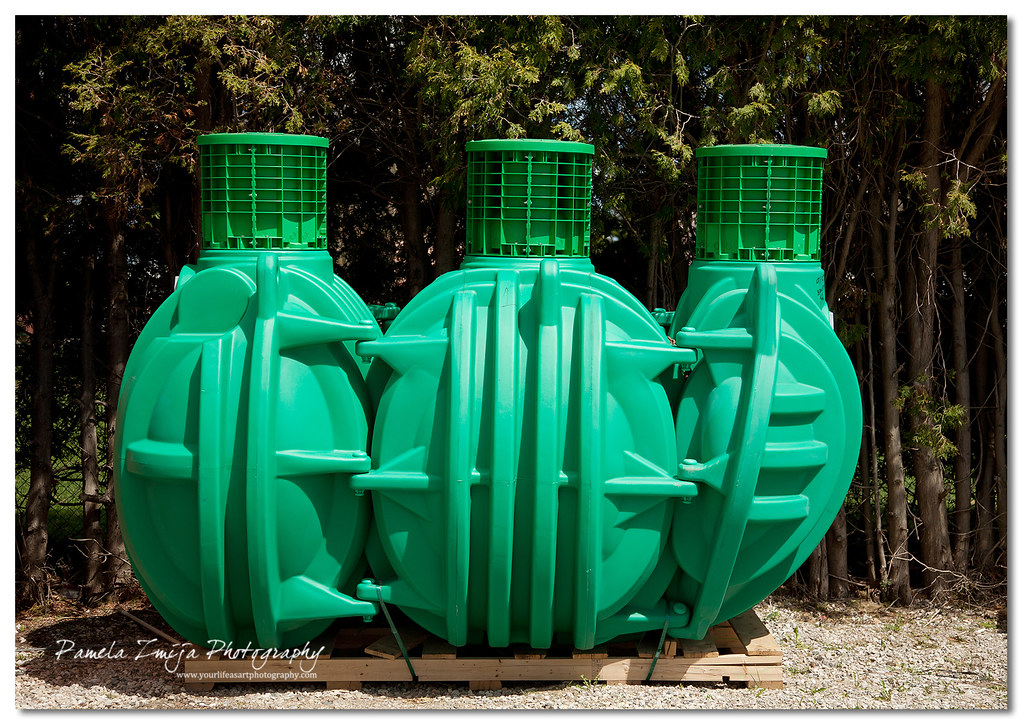 We are showcasing this new Environmentally Friendly Septic System tomorrow evening at our shop from 4pm-8pm. If you have a home or business with a septic this is something you will find quite interesting!
Come and check it out.

Join us for an Information & Demonstration of the Singular Green (by Norweco) Complete Onsite Wastewater Treatment Package A great “green” alternative for your Septic System! 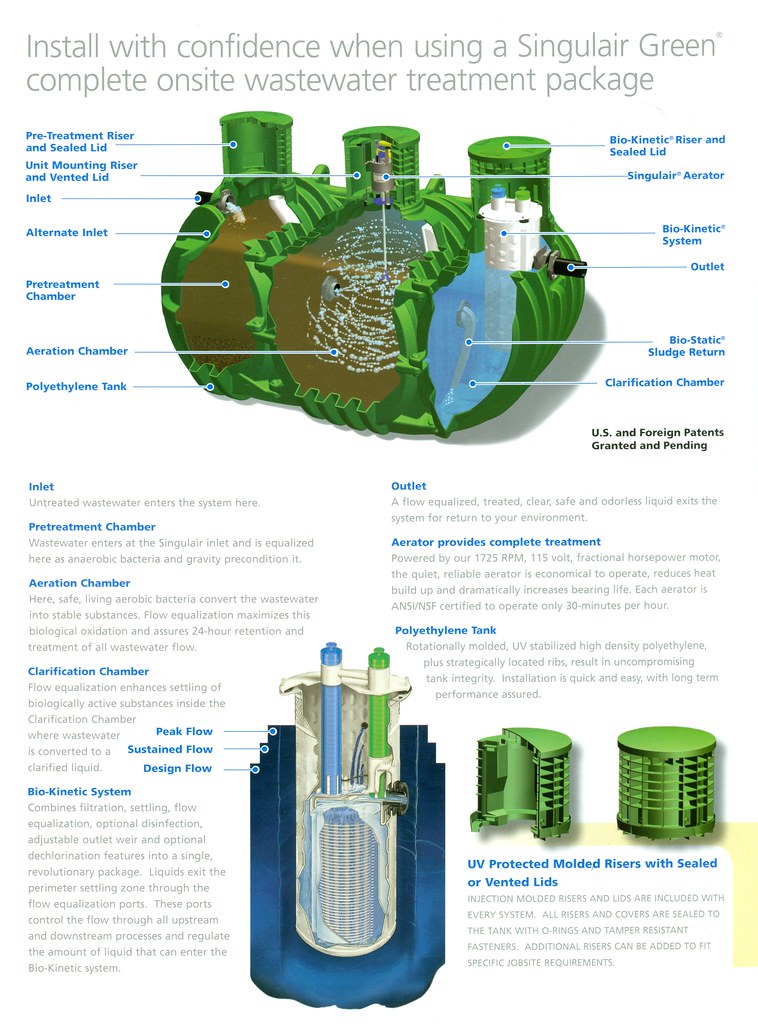 Information, Demonstration & BBQ
At our shop located at 695 Queen Street West in Mount Forest On Thursday May 12, 2011 from 4-8pm.

As your local, factory-trained, certified and licenses Singular Green Dealer we Sell, Install and Service every waste water treatment system with Pride! Consider the facts… Provided by Norweco

As a Norweco distributor we are fully trained to install your Singular Green system and any other Norweco product you may choose to protect your environment!

Our company has completed the Norweco nationally accredited Singular Green factory-training program and we have 5 fully trained technicians for the install and service of your Singular Green system! 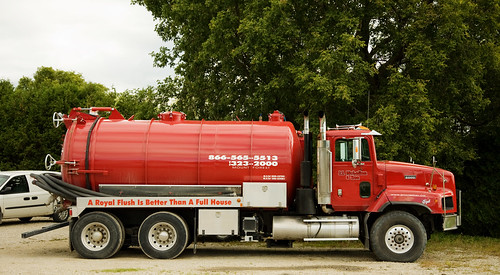 “A Flush Is Better Than A Full House”

Getting ready for your spring cleaning?
Don’t forget your Septic System…
Consider us the Dr for your Home’s Internal System!

Give us a call or drop an email to schedule 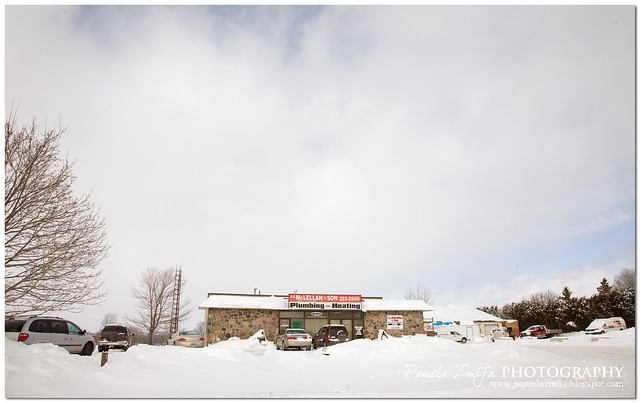 A typical winter in Mount Forest with lots of snow!

We would like to extend our best wishes for a very Merry Christmas & Happy New Year 2011! Stay warm and safe and enjoy the time with your family.