With Union Gas’s new promotion its now better than ever for people wanting to switch to gas TO switch to gas. Whether you want to upgrade your Furnace AND Hot Water Heater OR just your Hot Water Heater – now is the time! Never before have you been able to just switch over for 1 appliance and now you can and begin realizing the savings that come with Natural Gas!

Heating Season is here – begin saving even more of YOUR MONEY now!

pzmija heating, union gas September 23, 2011 0 Comment
Union Gas is now assisting new customers in making the switch to Natural Gas!
Check out this information below, which is from the Union Gas website and for more information check out.
http://www.uniongas.com/switchtogas/
AND be sure to check out…
http://www.uniongas.com/residential/campaigns/switchtogas/savings.asp

Switching Has Never Been Easier

This fall Union Gas is making it easier than ever to connect to natural gas and take advantage of low natural gas prices, special fall deals, and government grants. Don’t miss out! Contact your local Heating, Ventilation and Air Conditioning (HVAC) Contractor to switch today.

To ensure your new natural gas service is installed this year, have your HVAC apply to Union Gas on your behalf before the deadlines noted below. Hurry, the deadlines are coming soon!

These tips courtesty of Lennox.

General guidelines for keeping your home warm and efficient:

Extra steps you can take to save energy:

If you have any further questions or would like to book a fall cleaning and servicing please give us a call at 1-800-565-5513 or 519-323-2000. Interested in a new energy efficient heating, cooling and air quality system – give our Salesman Mike Johnson a call he would be happy to meet you at your home for a free no-obligation quote!

For our own customers information and protection I am copying and pasting the exact article from The Toronto Star below, at the bottom of the article is an email address for Ellen, the writer:

There’s a new law in Ontario to protect consumers from misleading sales of natural gas or electricity contracts.

The Ontario Energy Board audited 12 companies last month. It found all had failed to comply with the rules in some ways, such as not training agents properly or not mentioning a customer’s cancellation rights in a contract.

Nine companies have agreed to pay fines totalling $212,500, the board said this week. Two companies (Summitt Energy and Energhx Green Energy) have asked for a hearing. One case (MxEnergy) is still outstanding.

Now here’s the bad news. Many companies use the same abusive practices to persuade people to replace their water heaters.

Here’s a story that makes my blood boil, involving a vulnerable senior and a water heater replacement that leaked all over his basement.

A salesman went to the Toronto home of Jose Martins, 87, and said his seven-year-old water heater would be replaced under a government program to get rid of inefficient tanks. The switch took place within minutes.

MorEnergy was a competitor of the company from which he rented his water heater. But Martins, who didn’t speak English well, didn’t know that.

“He said his water heater wasn’t giving him any problems,” says daughter Laura Martins, “but by the end of the persistent and deceptive sales pitch, my dad had given him his gas bill and signed the rental agreement.”

The new tank started leaking a few days after installation. By the time Laura reached MorEnergy (since the office was closed), the carpet was ruined.

“I wanted to cancel the agreement and have the tank removed. The company told me it would cost $300.”

The Ontario consumer services ministry has received 1,700 complaints and inquiries about water heaters this year.

The 10-day cooling off period for door to door sales is absolute, says spokesman Stephen Puddister.

A supplier that pushes you to install a tank in a hurry can be seen as trying to deny your right to “cool off” under the consumer protection act.

And if a supplier wants to charge a penalty to remove its rented equipment when change your mind within 10 days, you don’t have to pay it.

“I understand the tank was a leaker. Since we don’t manufacture the tanks, we have no control over this,” he said.

As for the $300 removal fee, “the act is clear that if customers invite us in to do the work, then they have to cover the soft costs,” he argued.

Come on, John. Many people don’t “invite” MorEnergy into their homes.

They get a sales pitch from someone who declares their tank is no good — and agree to a replacement under the impression they’re dealing with their existing supplier.

MorEnergy has agreed to pay a $40,000 fine after admitting its agents wore badges that made people think they represented a gas or electricity utility.

I’d like to see the provincial government crack down on door-to-door sales of all products, including burglar alarms and water purifiers, because of proven abuses.

There’s an election campaign going on now. Is anyone listening?

Ellen Roseman writes about personal finance and consumer issues. You can reach her at eroseman@thestar.ca.

We are the service agents for Reliance within Mount Forest and the Surrounding Area, please do not hestitate to contact us to confirm the individual showing up at your door is NOT with us or Reliance. If you are unsure please call and do not let these individuals into your home! As in the past, any calls of these types of sales going on are immediately reported by us to the Chamber of Commerce who passes them directly on to the Township and OPP. 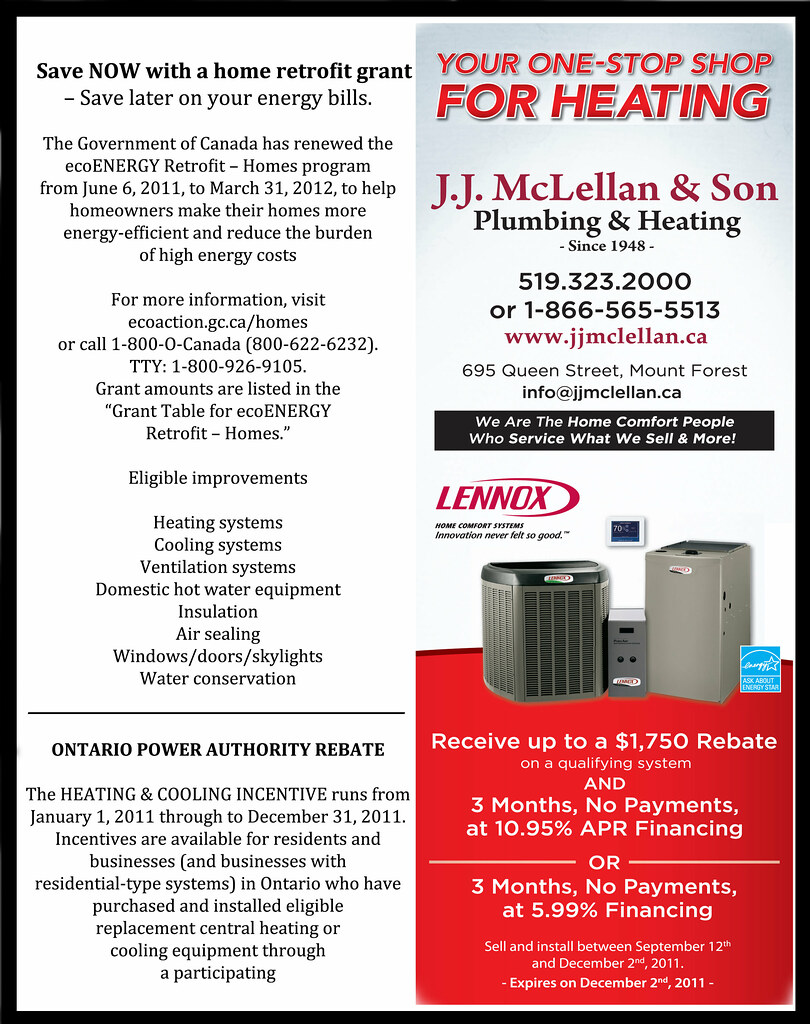 It is almost heating season! Hard to believe that the summer is coming to an end and fall is fast approaching us. With that comes our FALL PROMOTION for Heating & Air Quality Equipment!

We have individual rebate offers as well as system rebate offers. The System Rebate Offers are on an Indoor and Outdoor Units (Furnace and Air Conditioner) and you can also get additional rebates for Healthy Climate & Controls (HRV and Thermostat).

The savings really ADD up! Check it out!

Add-on Select Healthy Climate and/or Controls: Up to $250

Qualifying Heat Pumps/AC, and Furnace Total Grant: Up to: $1,540

AND Add total peace of mind to your purchase for your home that you will be completely covered for 10 years with Parts & Labour Warranty as well as very affordable System Financing!

Not only will you receive rebates back from Lennox and the ecoENERGYTRetrofit programs you will also breathe easy knowing you have a very efficient system for your home which will be economical to run and keep your air cleaner!